An iconic place in the the North is Shap, the old A6 that runs over the high fells between Kendal and Penrith. In former days, prior to the construction of the M6, it was the only western route up Britain often packed with vehicles nose to tail. In winter the road was regularly blocked with snow drifts, sometimes for days at a time. Lorry drivers and any others caught had to sleep in isolated farm houses or at the once legendary ' Jungle Caf', now merely a caravan retailers.

Coming south off Shap, a couple of miles north of Kendal, a church appears on a slight prominence. This is St John the Baptist, Skelsmergh, a chapel of 1869/71, built on an earlier site and close to a Holy well. 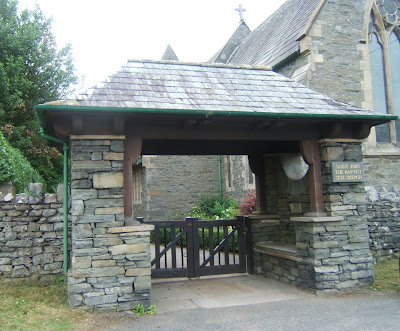 The entrance to the church is through an elegant lych gate - designed by John Flavel Curwen?? 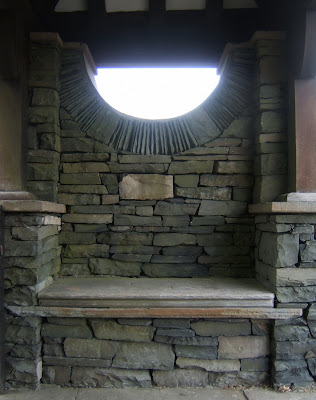 It has an Art-Deco feel about it.

The rafters bears an  inscription, 'Gate of Remembrance', that betrays its purpose as the primary parish memorial of the Great War.

Inside the church itself is one of the Oak Crosses that it seems were given to the parishes of his Westmorland constituency in 1916 by Colonel Weston JP, MP of Enyeat. Like at Crosthwaite and elsewhere it was placed in the churchyard as the wartime memorial, where families might nail a brass plaque with service details and date of death of their men and boys. 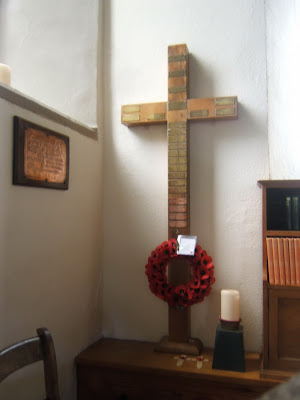 They shall not grow old
As we that are left grow old ....

It is perhaps the 2nd World War Memorial.