There is still a deal of snow on the tops but it has been sunny recently, the crocus are coming through and spring is just round the corner! So today I set off with friend Al for beef and ale pie at the Wasdale Head Inn, an amazing place. On the way home we dropped by the village of Gosforth. In the churchyard here is one of England's great treasures, a superb 10th century Scandinavian cross. 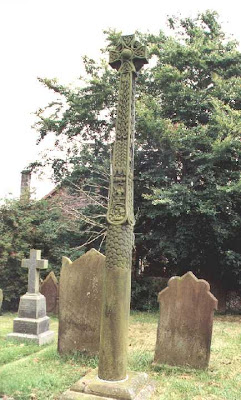 In the church itself there are a number of memorials to men of the district who have died in conflict. I have already posted that of Capt Chas Parker, RM.

Of equal interest in a marble plaque, created by Wm Brown of Stonehouse, Devon, commemorating Captain Sir Humphrey Le Fleming Senhouse, KCB, KCH -[Knight Commander of the Hanoverian Order of Guelph], RN, of Seascale, who died aged 60 at Canton during the First Opium War. Having served in the Royal Navy since 1801 his end came on June 13, 1841 aboard HMS Blenheim, a Third Rate 74 built at Deptford in 1813. He had been Senior Naval Officer of the China Squadron. 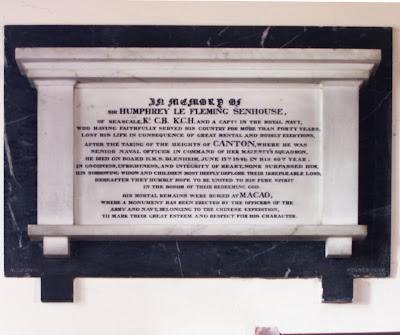 Capt Senhouse was buried at the Portuguese enclave of Macau where the monument below was erected by fellow Officers. It bears the Senhouse family crest. 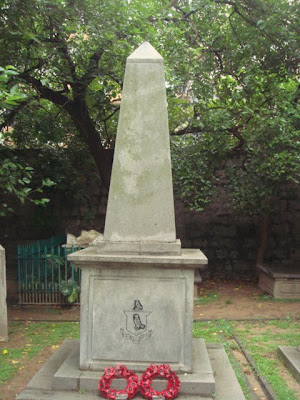 Sir Humphrey was a scion of the ancient family of Senhouse of Netherhall & Gosforth who had lived in the parish since the reign of Richard I. He was the third of ten children produced by William & Elizabeth Senhouse and a grandson of Sir Geo Fleming, Bishop of Carlisle.

The First Opium War was a pretty unpleasant business, a profoundly cynical exercise in Imperialism on the part of the British. The Chinese War Junks were blown out of the water by steam powered British warships. Part of the Treaty of Nanjing, drawn up at the war's end and seen here, saw Britain's acquisition of Hong Kong. The conflict also produced a long period of instability in the Chinese Empire as peasants attempted to overthrow the Quing dynasty. 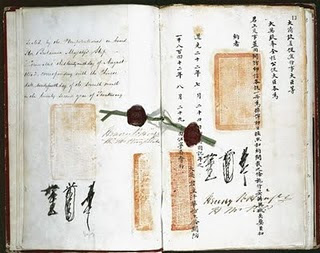