A glimpse of Staveley in Cartmel

I have favourite places. A seat in the corner of the churchyard of St Mary's at Staveley in Cartmel is one of them. It is a wonderful place of quiet above the busy A590. The church itself was built as a chapelry after the suppression of Cartmel Priory though it has been subject to a couple of restorations and rebuilds since the 16th century.

The churchyard is particularly interesting for the variety of grave markers and tombstones quite a few of which commemorate high status families. One of these is the Ridehalgh family grave containing the mortal remains of three generations. 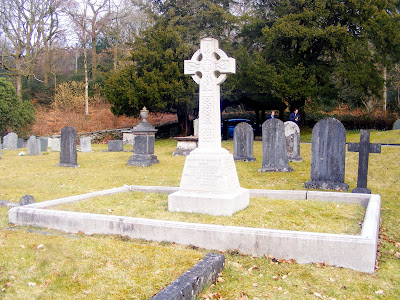 The family lived at Fell Foot, a substantial house on the shores of Lake Windermere now owned by the National Trust and run as a country park. The house and estate has a colourful history and passed through a number of hands until it was bought by Colonel George John Miller Ridehalgh, Lord of the Manor of Urmston, about 1859. He was a great benefactor in the district, an obsessive yachtsman and steam-boat enthusiast. Following his death the house was eventually sold in 1907 by his cousin, Wm Smith Ridehalgh, whereupon it was immediately demolished. The family moved to Broughton Lodge, closer to Cartmel. William Smith and his wife, Ethel, had just one son, George William. Born in 1916 he was serving as a 2nd Lt with the Welsh Guards when he died in 1940 to be buried in the family vault. 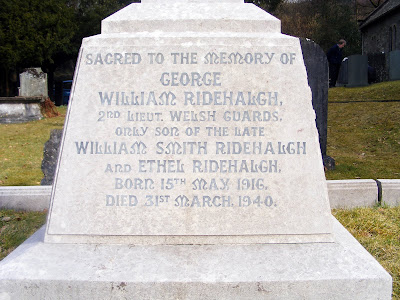 At some subsequent date his grieving widowed mother and his sisters erected a window in the north aisle of the church bearing figures of the archangels, Saints Gabriel & Raphael. 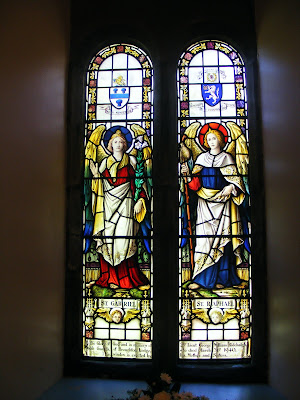 Oddly his name does not appear on two Rolls in the church but it does appear on the WW2 panel in the Lych gate, the village's primary war memorial. This gate, built from village oak, was constructed by the Wren family of Newby Bridge and unveiled in 1927 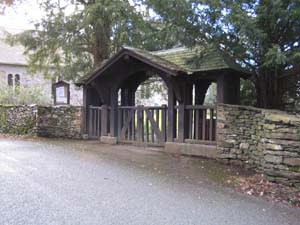 I have the following from friend Howard;


I remember old Mrs Ridehalgh living on her own at Broughton Lodge. We lived at Longlands Farm as kids and I remember her, a tiny old lady, peering through the steering wheel of a Vauxhall as she drove past the drive end. Her maiden name was Ravenscroft and she was renowned as a beauty, as the picture attached clearly shows. 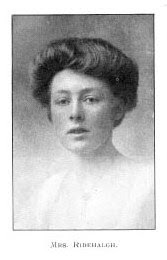 The Ravenscrofts were a wealthy cotton trading family from Birkenhead and lived at Wood Broughton. Her brothers all fought in the war.

This is an extract from my Field Broughton book; "The third house in the picture is Broughton Grange, then owned by the Ravenscrofts. The four sons of the household were reported by the Cartmel Parish Magazine of October 1914 to have "all gained commissions". Martin joined the 3rd West Lancs Field Artillery and gained the Military Cross in 1917. Gordon and Harold were both Lieutenants in 4th Battalion Lancashire Fusiliers, which was at Barrow-in-Furness at the time. This was an Extra Reserve battalion which remained at Barrow until October 1916 when it was transferred to Barry in South Wales where it remained for the duration of hostilities. Gordon was promoted to captain in the summer of 1915 and ended the war with this rank in The King’s Own. The Ravenscroft brothers went out to France and both were in the "thick of it" during the Somme battles of 1916. Harold was reported to be home in August 1916 after being wounded in the right shoulder and Gordon was back on duty after being gassed.
The fourth brother, Trevor, was commissioned into the "Lancashire Huzzars" and joined the Royal Flying Corps in 1915. The January 1916 Cartmel Parish magazine said, "Trevor Ravenscroft of RFC has had a wonderful escape. He fell from a height of 1300 ft with his aeroplane, diving headlong into a tree near the Brooklands Aerodrome. He was roped into his seat so did not fall out. The machine went straight down through the tree, cutting off branches 6 inches thick as though they were matchwood. When the inhabitants of the house nearby rushed out they found the airman walking about with a bleeding nose. Stranger still, the house was that of Miss Egerton, St George's Hill, Byfleet, Weybridge, who was delighted to be of assistance to one from Cartmel Valley, even though his visit had been so abrupt! We are truly thankful that he is none the worse." He was later reported to have been many times over the German lines in his aeroplane."