Death at Omdurman and a colonial war crime in the Sudan

Friend Rod has started turning up regularly with pics of war memorials he has encountered on his travels. The latest is a stack of pics from the north of the county including Lanercost. 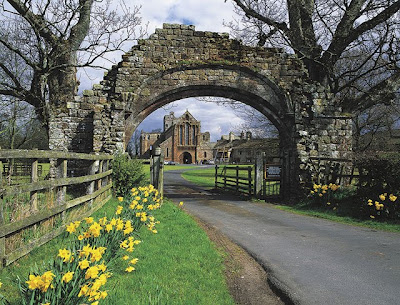 This wonderful former Augustinian priory largely built from the stones of Hadrian's Wall & often ravaged by marauding Scots was adopted as the parish church after the reformation. It has a number of memorials two of which commemorate brothers.

On the south wall of the nave is a slate slab bearing the names of the only two sons of artist John Charlton and his wife, Kate. 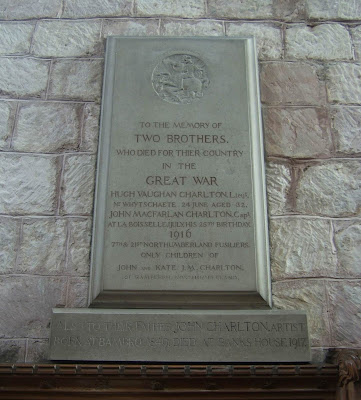 Both men were killed within days of each other. Hugh Vaughan, 7th Bn Northumberland Fusiliers, aged 32 on June 24, 1916 at Whytschaete. His brother, John Macfarlane, 21st Bn Northumberland Fusiliers, was killed exactly a week later at La Boiselle on the First Day of the Somme. Beneath the memorial there is an additional plaque for John, their father, who died at the family home, Banks House, Bamburgh in 1917. When I lived in north Cumberland as a boy I was told that he died of inconsolable grief. Echoes of Kipling's terrible grief on losing his only son, Jack.

There is also a terrible irony in that John made his reputation painting pictures of, among other things, glorious scenes of Imperial Military events such as The Charge of the Light Brigade. 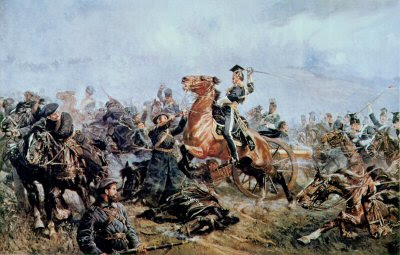 On the opposite wall of the nave is a further memorial containing bronze relief portraits of Hubert George Lyulph Howard & his brother Christopher Edward, two sons of 11 children born to George, 9th Earl of Carlisle and his wife, Rosalind. 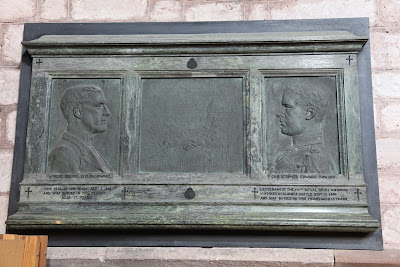 Christopher, a Lieutenant in the 8th Royal Irish Hussars, died at Slaines Castle, the Scottish seat of the Hay Earls of Errol, in 1896.

His Elder brother, Hubert, was killed at the Battle of Omdurman in the Sudan on September 2nd 1898, an Imperial campaign fought to avenge the death of Chinese Gordon at Khartoum in 1885.

Herbert Kitchener, soon to be known as of Khartoum, was leading 25,000 British, Sudanese and Egyptian troops against 50,000 Dervishes or Ansar, the followers of Abdullah al-Taashi, The Mahdi. 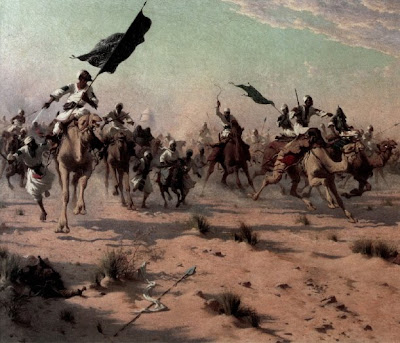 The Brits lost 430 killed and wounded. The Ansar lost 10,000 killed, 13,000 wounded and 5,000 taken prisoner. After the battle Kitchener had the Arab wounded slaughtered. 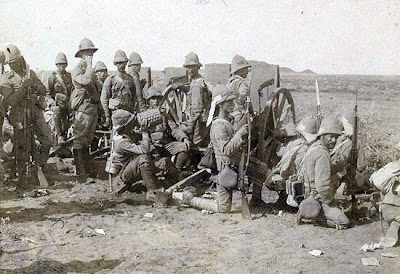 Members of the Lincolnshire Rgt at the Battle.

Hubert Howard was not in the services but was working as a special correspondent for The Times & various other newspapers, an adventurous Churchillian aristocrat, typical of late Victorian England. He was educated at Balliol, Oxford, went to Cuba in the early stages of the rebellion against the Spanish authorities and joined the insurgents in the summer of 1895.

When the second Matabele war broke out in the spring of 1896, he travelled there to serve as a lieutenant in Robertson’s “Cape Boys”. In August, Howard was severely wounded in the leg during the attack on Secombo’s stronghold by Colonel Plumer’s column. 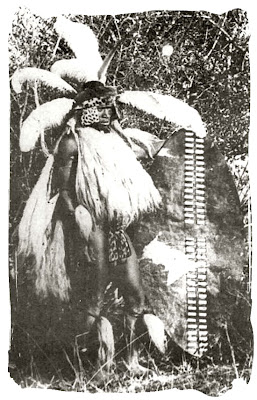 For a time he was then Private Secretary to Earl Grey of tea fame. After his return from South Africa he was called to the Bar and worked in the legal profession for a time. Following his death he was buried in the Sudanese desert.

Omdurman was a bloodbath, a Sudanese holocaust. The battle and the memory of the Mahdi is still revered in the Sudan where the Brits are considered to be war criminals .... for more check out this link or this one.

The Earl of Carlisle lost another son in the Great War, Michael Francis Stafford died serving as a Private with the 2nd Bn Honourable Artillery Company although he had previously been a Lieutenant with the 18th Hussars and the Scots Guards. He was killed on 9 October 1917, age 37 at Passchendaele.
Posted by Louis at 19:21