Another nice day and a trip out, just twenty minutes up the road to Satterthwaite close by Grizedale Forest and its many tourists who take advantage of the forest walks.

The lovely little church of All Saints, of 1914, is in the centre of the village. 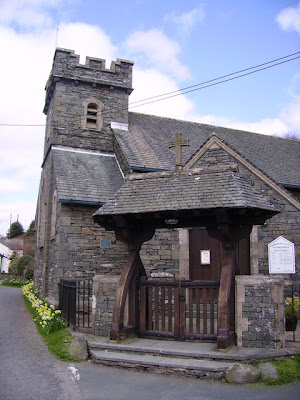 Just out of curiosity the image below is taken from the film The One That Got Away, filmed in the 1950s and relating the tale of Oberleutnant Von Werra, a Luftwaffe pilot of who made an attempted escape from nearby Grizedale Hall, a wartime POW camp. 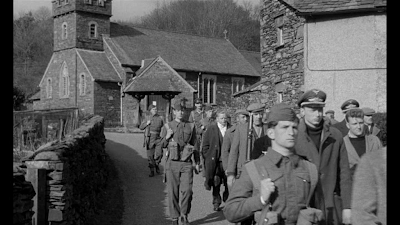 The church has within it three memorials. Two Rolls of Honour for the two world wars and an impressive Shrigley & Hunt window commemorating Capt Thomas Geoffrey Brocklebank, West Lancashire Howitzer Brigade RFA, son of Harold Brocklebank of Grizedale Hall. He was killed at Maricourt in August 1916 aged 33. 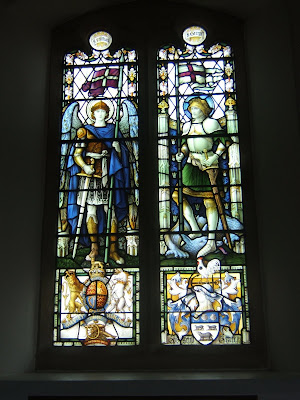 The two Rolls are interesting in that the later one adopted the same design of that created post 1918. 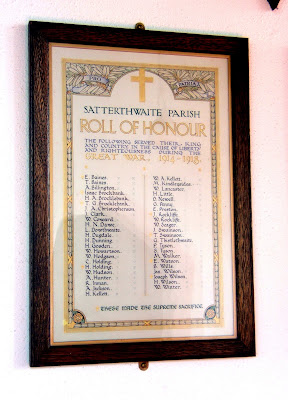 They are both illuminated by hand, indeed the similarity suggests that they may both be made by the same craftsman. However, the lettering of the names is different so that may not be the case. Neither are signed but they are beautifully executed.

Also of note are changed perceptions of purpose and validation expressed in the two dedications. The Roll of the Great lists the men who served ... in the cause of Liberty & Righteousness ... while those of 39/45 fought for ... Freedom & Peace .... .

The Elevated Rhetoric of Great War memorials prompted Bob Bushaway to suggest that the language of remembrance might give the impression that the conflict was not a military issue but entirely about issues of morality and nothing more. But it is difficult now to imagine the unquestioned moral superiority of the British Imperial system and the nation in 1914/19, a morality that provided the rhetoric and imagery of post war remembrance. Maybe Butcher Blair was prompted by something similar when he embarked on his wars in Iraq & Afghanistan.

Clearly after WW2 sentiments had changed and language with it. There was a recognition that the nation had been reluctant to confront continental Fascism, hoping against hope for a peaceful conclusion. Thus the 'restoration of Peace' was a significant validation for the conflict. 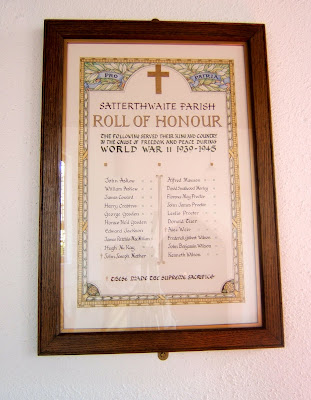 It is also noteworthy that the Great War roll contains 45 names, that for the Second War just 20. I guess this may have something to do with the Grizedale Hall estate, vibrant and fully staffed Edwardian country house style in 1914, but much depleted by 1939. Brocklebank had bought the estate in 1903 and worked it hard, probably employing a significant number of men. However, he sold his entire interest to the Forestry Commission in 1937. As a consequence many staff will have become redundant.

There are no obvious memorials in the village for war dead other than these rolls. Odd. I have a sneaking suspicion that the Lych Gate might have something to do with the apparent omission, or might there be special trees somewhere in the parish?
Posted by Louis at 23:30