The weather continues to be superb so I took off today to get into the church at Tebay and failed for the fourth time. Can't get in touch with the key holder. So I had lunch at the best service station in Britain, Tebay, and carried on into the beautiful village of Orton on the Appleby road.

Orton is dominated by the white tower of All Saints parish church, visible for miles around. 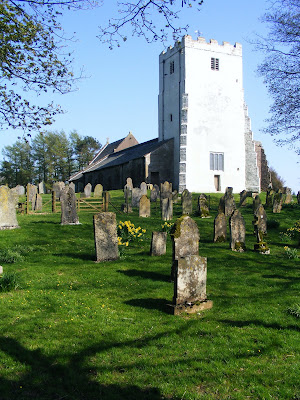 The church probably dates from the early 13th century though the vicarage, together with those of Pennington & Muncaster, was given to Conishead Priory by Gamel de Pennington sometime between 1154 & 1163. The spectacular perpendicular tower dates from the 16th century. Over the centuries there have been many additions and restorations, the last by Paley & Austin in 1877. The limewash is recent. 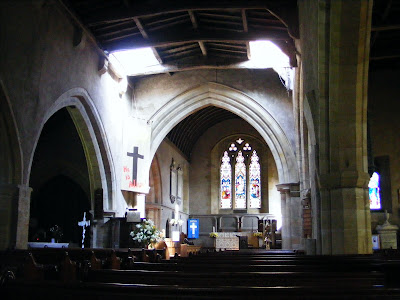 The village war memorial 'Hallowed to the men of this parish ...' stands at the east end of the south aisle. It was dedicated by Rev Dean Lyndon Parkin and unveiled on June 24, 1920 by William Wilson of Orton who had been an ardent church worker for seventy years. A floral cross was placed at the foot of the monument, inscribed - With cherished memory of loyal chums, from those who were spared to return.

I know of only one other example of a monumental memorial inside a church, that at Brough. Here at Orton the memorial - a stock grave marker probably produced by an established monumental mason somewhere in the district - is surmounted by a carved urn for the ashes or heart of the dead. I could see no makers signature. It is made of local limestone from Orton Scar, a rock that defines the landscape around the village. Such use of local stone was a common way of making a statement of place for a memorial; at Coniston local greenslate, at Hutton Roof a lump of local limestone pavement. 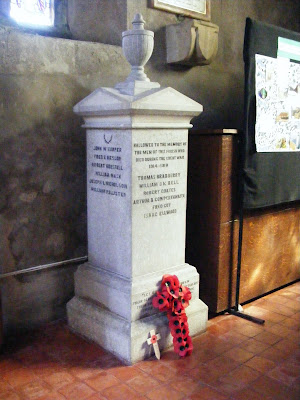 Beneath the dedication and on the side panels are the names of eighteen men who died 1914-18 .

Having been sited in the church, probably since its creation, the memorial remains unweathered and is a reminder of how striking such stone cut memorials must have been when first erected.

Orton & Tebay local history group have a website www.otlhs.ukme.com where details of Tebay memorials can be seen together with lots of other local stuff.
Posted by Louis at 21:49