Finally got round to looking in some detail at Askam war memorial, or, more properly, Ireleth with Askam. 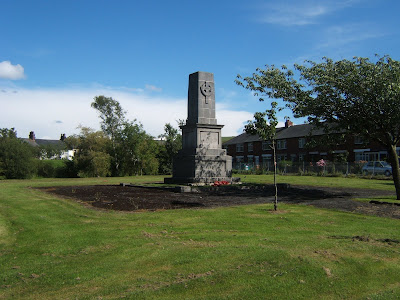 The long eleven year struggle to establish this imposing monument commemorating the dead of a small mining village in the Furness peninsula is quite a fascinating tale. In the 78 years since its creation the monument itself has changed little but its environs have, as can be seen from these two images. 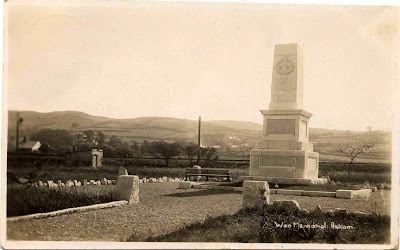 The large blocks of limestone that originally marked the path in front of the memorial together with those surrounding the central area together with the bench have all gone. There are, however, a number of trees now - some quite mature and others planted more recently.

The long story of this imposing memorial starts soon after the armistice of 1918 when Henry Mellon, mining engineer, formed a committee from the village elite; James Poole Atkinson, Dr Cook and Rev E W Ridley, vicar of the parish. There were probably others. Together they resolved to invite Sam Grundy ARIBA of Ulverston to design a memorial.

Grundy drew up a comprehensive design for a village hall but it soon became apparent that against a backdrop of collapse in the mining and steel industry throughout Furness it was hugely over ambitious. He then suggested a memorial cross, to be erected at the station entrance. But this too was a non starter. In desperation the memorial committee finally ordered a bronze plaque for the local church

More to follow on this over coming weeks
Posted by Louis at 21:51