I have just realised that what is probably the most poignant little memorial I have found in my years of researching, indeed one of the best, has not been described!


When first looking for memorials, sometime after the millennium, I had no idea how many memorials there were in South Lakes and simply drove around, checked out village and town centres and looked in churches. It very soon became apparent that - a) there were memorials everywhere and - b) many had been lost.Thus it was wonderful to find one that was long thought lost.


While looking in Staveley in Cartmel church, the warden mentioned in passing that there had been a memorial in the village school, now the village hall, which lies beside the church. She remembered it was in a cupboard for years but having taken a look it was no longer there. After much chuntering and encouragement it turned up in the office of a local business.


Badly damaged with damp, unframed, but what a gem, a rare survival. 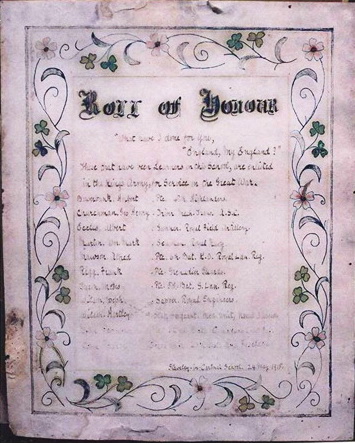 Slightly smaller than A4 it was drawn up by the children of Staveley in Cartmel village school on 24 May 1915 and lists the names of those village lads who had joined up in the great surge of volunteering of 1914/15. I imagine the teacher actually drew it.


The language is naturally the 'elevated rhetoric' or 'language of courage' that emerged during the Great War.


What have I done for you 'England my England'.

Sadly I took this pic years ago with a rubbish 2mp camera and I can't read it!

Email ThisBlogThis!Share to TwitterShare to FacebookShare to Pinterest
Labels: Staveley in Cartmel