Just had a posting from a guy called Stephen C who is interested in the Alston memorial, specifically one man named on the memorial screen - Nowell Oxland. It appears that he was a local Cumbrian poet, rugby player and son a former vicar of St Augustine's parish church. Stephen is clearly a rugby player and enthusiast and has set up a website describing the commemoration of the men of Rosslyn Park Rugby Club, Roehampton who died in the Great War. Check it out here.

Of particular interest to me was the information that the reredos, featuring two painted panels depicting Saints George & Michael(?), are in fact portraits of Lt Noel Oxland, 6th Borders. 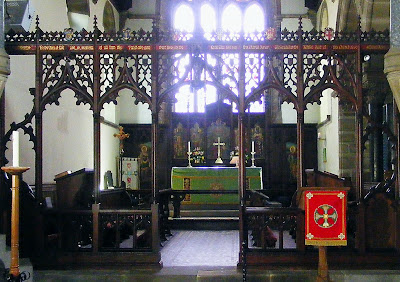 The memorial screen can be seen here with the reredos behind the altar. On either side of this reredos the painted panels can just be made out.

That on the left depicts St Michael, if indeed this the right attribution..

On the right, St George.

.
It is self evident that they depict the same man.

Stephen's biography of Oxland on his website is most interesting and includes a photo which is clearly the same man as the portraits on the painted panels .... 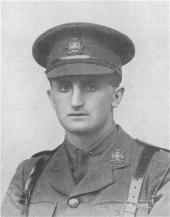 Born in Cumberland, a vicar's son who attended Durham School as a Scholar, rower and XV rugby player and from 1909, Worcester College, Oxford, reading history when war broke out. While at Oxford he played rugby for Rosslyn Park (1910-11 XV photo), Richmond, Middlesex and Cumberland. He was gazetted as a 2nd Lieut, 6th Border Regiment in 1914 (staying loyal to his northern roots although his parents now lived in Portsmouth) and went to the Dardanelles,Turkey in June 1915 (as did Arthur Dingle and several other Park players).....

His poem 'Outward Bound' appeared in the Times in August 1915, and can be found in many anthologies. Written en route to Gallipoli, he invokes the past invasion by the Greeks  at Troy (across the Dardanelles) but dwells more on his fond memories of his home county:

We shall pass in summer weather/We shall come at eventide.../One with Cumberland for ever/We shall go not forth again.

What a lovely sentiment. A Cumbrian lad indeed!
Oxland was killed on August 9th 1915 aged 24, two days after the 6th Border's Brigade had taken Green Hill and Chocolate Hill, Gallipoli. He is buried in Green Hill Cemetery.

Thanks Stephen and sorry for the lousy quality of the photos!
Posted by Louis at 01:10

Email ThisBlogThis!Share to TwitterShare to FacebookShare to Pinterest
Labels: Alston

Noel Oxland is one of the War Poets and his poem appears in numerous anthologies. I Northumberland County Archives, under Bishop's Commission of Enquiry, are papers relating to Noel's father, William, Vicar of Alston. Although unable to carry out his parish duties, and carrying a terrible sadness, he refused to leave the Rectory. This was because he sorrowed at the death of his son, Noel, at Gallipoli. He couldn't bear to leave the place where his son had been reared. The papers are largely unused, and awaiting anyone who wished to investigate them. His father eventually left and went to Portsmouth. Formerly he had been in the Royal Navy.
Dr Ashton - shiremoor30@talktalk.net