Throughout Cumbria there are hundreds of sites where aircraft have crashed over the years. Some of these were civilian but most were military. Of the latter a significant number fell to earth during the second world war.

Perhaps the most famous crash site is that on Great Carrs, a wild fell lying to the south of Wrynose. 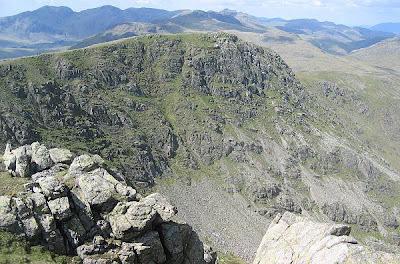 On the night of October 22 1944 Handley Page Halifax LL505 FD-S was on a night training exercise flying out of RAF Topcliffe, Yorkshire. It was part of 1659 Heavy Conversion Unit in No 6 Group, Bomber Command.

On the fateful night Pilot John Johnston flew low over the hills in an easterly direction so that the navigator could get a ground fix. However, the aircraft hit the ridge between Great Carrs and Swirl How before plunging over the crest. All 8 crew were killed. 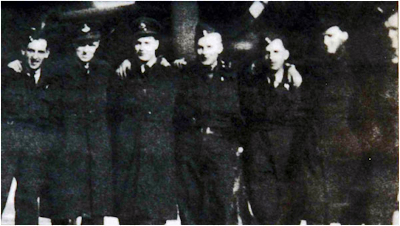 Ferguson was buried at New Monkland Cemetery, Lanarkshire. The rest of the crew were buried together at Blacon cemetery, Chester. 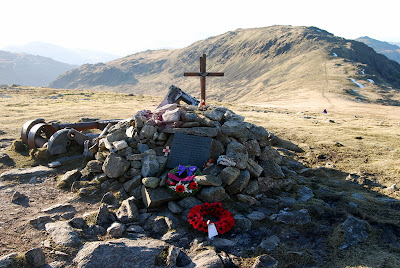 At some time a cairn was constructed on Great Carrs and bits of the aircraft brought to it, specifically the under carriage. More recently a memorial plaque was placed at the site. 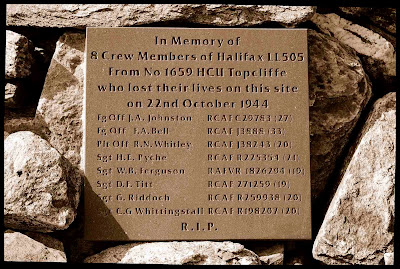 Hi,
It's always a sad reminder of darker days and when you read behind the headlines and see the lengths that some of these fliers went to in order to fight Hitler it is amazing ( eg the Poles, Dutch and so on)

We came across a memorial for those killed over the Cheviot hills ...see here