Bampton - in the valley of the Lowther

Summer is a comin' in so it's days out with friends. And a wonderful clear blue sky with no contrails! Yesterday to Shap and some of the villages in the valley of the river Lowther. Bampton Grange was one, with a name like that it must have been a grange of the Premonstratensian Abbey of Shap, a favourite place of mine. Its romantic ruins nestle in the fells some miles away. 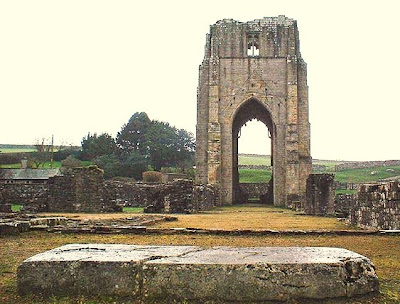 The church at Bampton, an early 18th century building replacing a pre 1170 foundation, has three memorials to 20th century conflicts. One each for the dead of two world wars and a large wooden roll listing the guys who served between 1914/18. 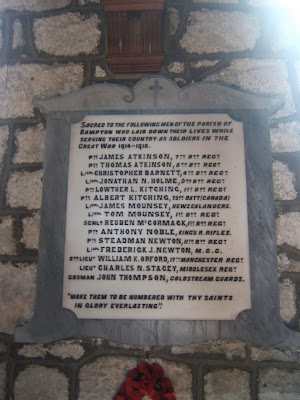 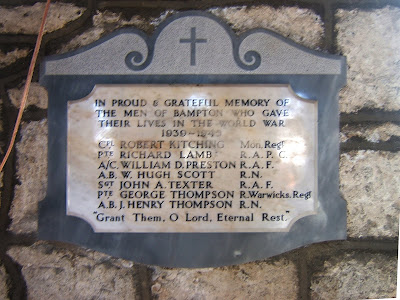 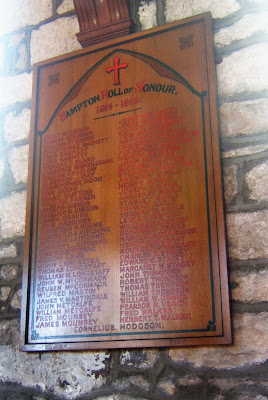 The two stone ones might be Beattie's of Carlisle. They certainly have a look of their work.

There is also a Memorial Hall; is this a War Memorial? 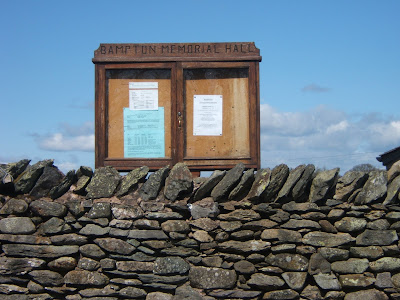 However, the most interesting memorial is in a dark corner thro' the church door at the foot of the tower. It commemorates Vice Admiral Charles Richardson KCB, a man educated at the village school who made good in Nelson's navy. The memorial seeks to inspire other callow village youths to follow his example. The Admiral fought in the battles of The Glorious 1st June, Camperdown, at Flushing, the Indies, indeed he served King and country throughout the world for decades. 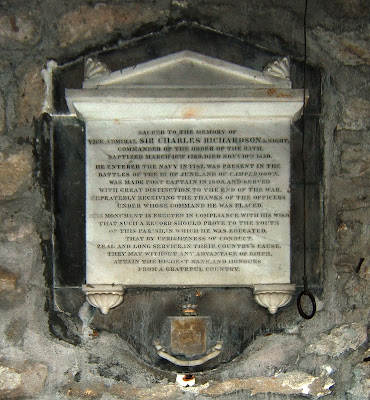 Richardson entered the Navy in November 1787 as servant to Captain Richard Strachan aboard the Vestal, 28 guns. In the early 1790s he was employed on various riverboats supporting Abercromby's operations against Tippoo Saib. By 1793 he was in the Channel Fleet aboard the Alexander, 74, under Captain West and in '94 the Royal George, 100, flagship of Sir Alexander Hood, in which ship he partook in Lord Howe's action of 1st June.

In August of 1794 he was commissioned Lt in the Circe, 28, under Capt Halkett, which was heavily involved in the mutiny at the Nore. In October 1797 Richardson was at Camperdown, a battle fought against the Dutch, and famously took an open boat to Admiral De Winter's dismasted flagship, took him prisoner and personally presented him to Lord Duncan, the victorious British Commander. Richardson was rewarded with promotion to signals Lieutenant aboard Duncan's flagship, Kent, 74. In 1798 he commanded a division of seamen in the Helder, took a Dutch 58 home as a prize before sailing with Abercromby to Egypt where he fought at Aboukir on 8th March 1801.

In July 1802 he took command of Alligator in which ship he directed operations leading to the reduction of Demerara, Essequibo and Berbice in 1803 and Surinam in 1804. As a consequence of these actions he raised his broad pennant in the Centaur, 74 and then the Caesar, 80. In this ship and in company with Richard Strachan, he pursued the French ships that escaped annihalation at Trafalgar, destroyed three French frigates at Sable d'Olonne, a French squadron at Aix Roads and then went on to land at the Scheldt where as senior Naval Officer he took the French surrender. During the investment of Flushing he commanded a battery of 24 pounders with sufficient effect to earn the praises of the Earl of Chatham, C in C British forces. In April 1812 Richardson commanded the frigate Semiramis and proceeded to take a significant number of prizes, among them the French privateer Grand Jean Bart, 14 guns. He continued to serve in the Channel, off Lisbon, the Cape of Good Hope and China until he was invalided out of active service in 1822.

What a career! What memories!

His prizes will have made him a wealthy man. Certainly he bought the estate of Painsthorpe Hall, East Yorkshire where he died, aged 81 in 1850. It is clearly a beautiful place. 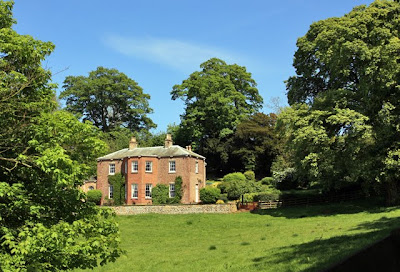