Another window or 2 - at Tebay

Finally got into Tebay church, they had an open day over bank holiday weekend. There were two window memorials in this delightful 'Railway' church. 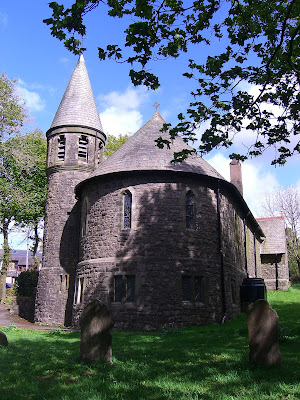 The most impressive was this large three light display commemorating the dead of the Great War & inserted in 1920. The modelling is superb and the imagery of the sacrificial Knight being offered the 'Crown of Life' is very similar to the Rawlinson window at Field Broughton and others at Preston Patrick & elsewhere. Another take on St George! 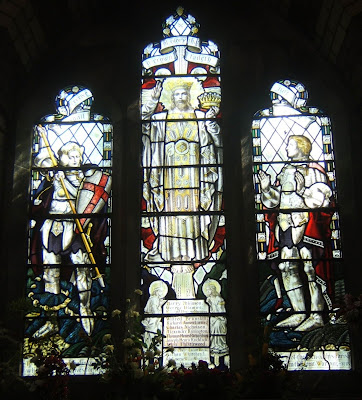 It was made by Curtis, Ward & Hughes of London. In the 19th century Henry Hughes started as an apprentice with Ward & Nixon glass before marrying an Elizabeth Curtis. On Nixon's death Hughes became a partner with Ward. Some time later Thomas Figgis Curtis, a designer employed by the firm and a relative, became a further partner. In 1883 Hughes died and Curtis continued running the firm until the 1920s.

A shap granite plaque contains the names of the dead of the second world war. 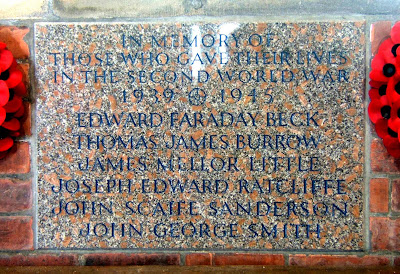 A further small window is at the west end of the church.

This was made by Abbott & Co, a long established firm of Lancaster glass makers. It commemorates Private John Thistlewood of the Northumberland Fusiliers who died of wounds suffered on The Somme aged 22. 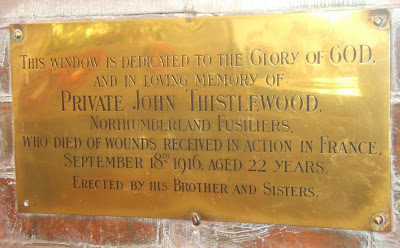 lovely to see this and read yur blog.

my father was vicar here in the 1960s and I have very happy memories of these windows and the memorial.

heavens, i can almost smell again the polish they used to use in this church!