As I have suggested elsewhere there are a significant number of windows in Cumbria that were placed as memorials. The vast majority date from the time of the Great War; some are community, some commemorate individuals. However, at Arnside Methodist church there is a rather unusual Peace Window. 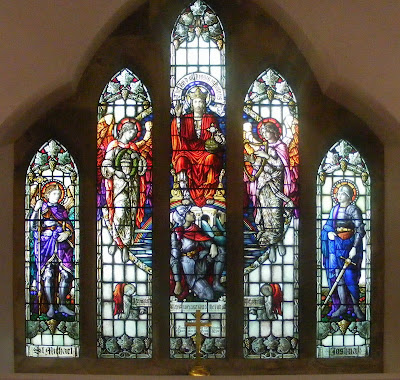 Unveiled by Major Reverend W Rushby, MC, Chaplain to the Forces, on July 10, 1921 it was made by Barrowclough and Sanders and cost £310. Allen Barrowclough & Joseph Newbold Sanders remain elusive characters. They have windows at Scotforth, Lancaster & Churchtown nr Southport but precisely who they were I don't know.

It has an unusual iconography. St Michael, left, is predictable but Joshua, right, is not. But then he was Moses' right hand man and conquered 'The Kingdom', Canaan, so I guess his purpose here is to signify a biblically righteous military victory. Christ the King whose feet rest on a rainbow is flanked by two angels, that on the left holding a wreath, on the right a lyre. Crouching beside a fountain, below Christ, is a dashing young knight sans arms, his work done.

The window's dedication is;

It's appropriate time to make some plans for the future and it is time to be happy. I have read this post and if I could I desire to suggest you few interesting things or tips. Maybe you can write next articles referring to this article. I want to read even more things about it!
My webpage :: depression inspirational quotes