When discussing the losses in the Great War, and specifically those suffered by the industrial communities of the north such as Accrington, the focus is invariably on the Pals Battalions; units raised in local neighbourhoods and often stripping whole streets or factories of young men. However, the appalling losses of such as the Accy Pals at Serre on July 1 1916, were often suffered by territorial units. Maybe not quite so bad, but bad enough.

The graph below shows when the men and boys listed on Ulverston's primary memorial were killed. (August 1914 to December 1918). 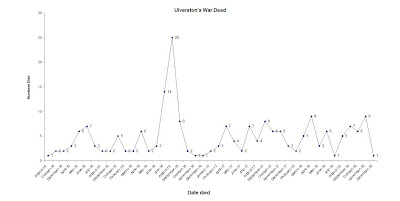 The most striking feature is the huge peak of July (14), August (25), September (8), 1916 when the lads were fighting on The Somme. Nothing approaching such a concentrated loss was experienced before or after. Nor should it be forgotten that for every man killed approx 3 would be wounded - thus, with 47 dead, 'Lile Oosten' probably suffered a total of some 200 casualties during this period. 20 of these men were killed in July/August fighting with the 1/4th King's Own, the local Territorial unit that recruited throughout Furness and Cartmel. Indeed in the whole three month period the unit lost 194 men killed and perhaps 500-600 wounded.

These casualties were largely a consequence of the attempt the break the second German line on The Somme at Guillemont. The men of Furness and Cartmel attacked a quarry to the north west of the village from a start line at Arrow Head copse just to the west of 'The Sunken Lane'. They were cut to pieces. A description of this place is contained in Ernst Junger's classic 'Storm of Steel'; as a young German soldier Junger was fighting in The Sunken Lane some weeks after the 1/4th attacked. Check out http://leoklein.com/itp/somme/texts/junger_1929.html . The pic show the site of Guillemont Station some 200 yds north of where the ulverston lads fought. This was a railway station! The village used to be on the horizon! 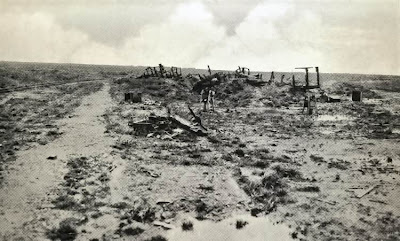 One of those killed, on 8 August, was John Burrow, Assistant Master in Dalton School. He is buried at Guillemont Rd Cemetery - close to Raymond Asquith, son of Herbert Asquith, Prime Minister in the early years of the war. Raymond's grave is just to the left of the entrance, seen here. John's is at the back of the cemetery. 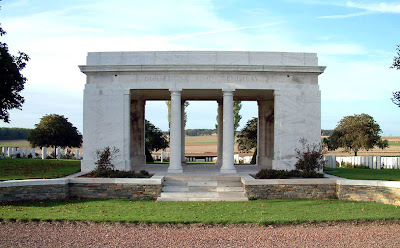 Of all the guys killed in this three month period, July - Sept 1916 and named on Ulverston Cross, one died in Tanzania, one in Iraq, one at Ypres and two at home. The rest were killed on the Somme. 26 have no known grave and are commemorated on the Thiepval Memorial to The Missing of the Somme.

The graph is interesting in other ways. The first peak of casualties (reading from the left) illustrates losses suffered at Festubert in the summer of 1915, shortly after the 1/4th went to France. Also the losses of 1918 (54) approached those of 1916 (69). Indeed for the country as a whole the casualties increased in each year of the war. It is only in small communities, such as Ulverston, that the losses are skewed by the involvement of a territorial or a Pal's Battalion.