As the years of my life have passed the realisation has dawned that I have become part of history. My memories of the '60s could now form part of a History module at University, and how I regret not talking more to my Gran about Victorian Burnley or to my Father about his desert war. And there are other missed opportunities. When I first came to Ulverston some 30 years ago a cousin of my Father's, Aunt Renee Ferrier, told me that she knew the town well. From 1940 - 45 she was an ambulance driver at Conishead Priory, now the Manjushri Tibetan Buddhist Centre but at that time a military hospital. 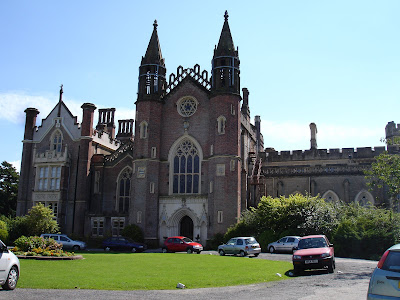 I wonder whether she knew Maximilian von Herff?

Born in Hanover on April 17, 1893 Von Herff served throughout the Great War attaining the rank of Colonel and winning the Iron Cross first and second class. During the second war he fought in North Africa under Rommel, most notably during the German attack of spring 1941 and the subsequent investment and siege of Tobruk. During this action he led Kampfgruppe Herff westwards beyond the Cyrenaican/Egyptian border liberating Fort Capuzzo and Bardia and capturing the town of Sollum and by the end of April the strategically important Halfaya Pass. In June of that year he was awarded the Knight's Cross.

After his capture he was a Prisoner of War at Grizedale Hall POW camp but was taken ill and died at Conishead Priory.

The first pic shows Grizedale camp during the war. The pic below shows the hall as it featured in the film The One That Got Away, relating the story of Oberleutnant Von Werra a Luftwaffe pilot who attempted an escape. 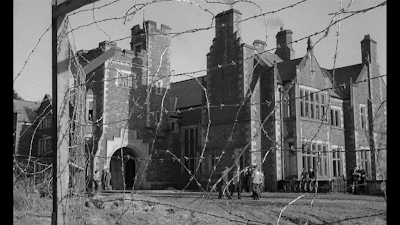 Initially Von Herff must have been buried in Ulverston cemetery but together with all the other German war graves in the UK he was subsequently reinterred at Cannock Chase German War Cemetery, Staffs. There is, however, an added irony. Had he lived he would, as a high ranking member of the Schutzstaffel, almost certainly have been indicted to appear at Nuremberg to answer charges of War Crimes. Here he would have faced Norman Birkett KC, deputy to Lord Justice Lawrence, Britain's chief prosecutor. Norman Birkett was an Ulverston lad who in 1958 was created 1st Baron Birkett of Ulverston. So it seems that the unfortunate Von Herff was destined to engage with Ulverston whatever his fate!

It might be a mere coincidence but in his memoirs that most decent and chivalrous soldier, Feld Marschall Erwin Rommel, briefly describes the actions of the Kampfgruppe but never mentions Von Herff by name.

As a final note - Lord Birkett has an excellent quote listed in the Oxford Dictionary of Modern Quotations:

'I do not object to people looking at their watches when I am speaking. But I strongly object when they start shaking them to make certain they are still
going.'