In 2005 I travelled down to Portsmouth to see my daughter who was studying Russian at the University. While there I took the opportunity to visit the extensive museums & exhibits in the Royal Dockyards. During that year the focus of the exhibits was the bi-centenary of the Battle of Trafalgar and the death of Nelson. Layed out on the floor of one of the old sail lofts and pitted with holes from French cannonballs was the absolutely huge mainsail that HMS Victory wore during the battle. Surely a national treasure? 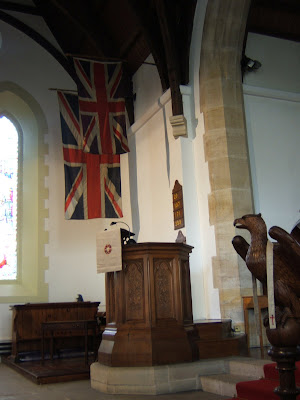 In the church at Sawrey (more properly Claife), close to Beatrix Potter's house at Hill Top, there are two union flags, a smaller one and a larger one. A small brass on the wall and an accompanying note explain that these were presented to the church by the Rev CC Dickson who during the Great War was a chaplain to the forces. The note also states that the flag, presumably the larger one, flew over Field Marshall Douglas Haig's headquarters at Cambrai, France on November 11, 1918. The smaller flag has no provenance but it may well have been used by Dickson during church services or burials. Such smaller Union Jacks are fairly commonly associated with memorials.
However, I would suggest that the 'Armistice Flag', if such I may call it, is an astonishing object. It is absolutely unique, of national importance, and must most assuredly have a special place in the great continuum of British history.
Posted by Louis at 01:44