I recently picked up this old postcard showing Troutbeck veterans attending a dinner given by Colonel Dawson of 'Birkhead', Troutbeck at The Mortal Man Hotel on July 19, 1919 - The National Peace Celebration Day. 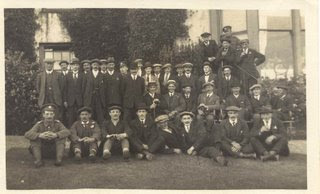 Although an armistice that silenced the guns was signed on November 11, 1918 between Germany and the allies, it was not peace. People remained wary, hardly able to believe that the conflict had ended. Indeed the vicar at Hawkshead reminded his flock at Christmas 1918 that peace had not been declared and that men continued to die in great numbers in hospitals across the country. Only after the signing of the peace treaty at Versailles on June 28, 1919 did the war truly cease.
The government officially designated July 19 as 'Peace Celebration Day' and communities throughout Lakeland responded with alacrity. As at Troutbeck, the focus was generally on the veterans, or those who had returned, and the children. The men were treated to meals and 'smoking concerts', the children generally presented with mugs or medals commemorating peace. In some villages the men would be presented with gifts, at Arnside engraved watches, elsewhere silver topped walking sticks engraved with the man's name and regiment.
Many war memorials carry the dates 1914-1919 as a consequence of the date of the peace treaty.
Do right click on the picture and download it. Can anyone give these guys a name?
Posted by Louis at 22:04